Why IPv6 is important 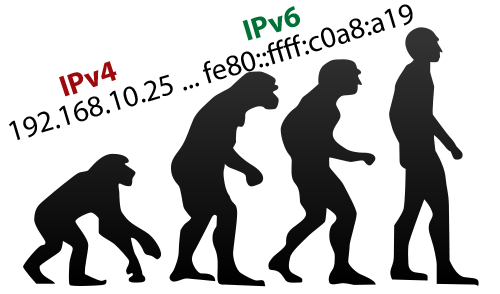 Internet Protocol version 6, or IPv6 for short, is nothing new. In fact, the first standard of IPv6, RFC2460 (http://www.ietf.org/rfc/rfc2460.txt), was published in 1998 and the first proposal for IPv6 was drafted twenty years ago! Despite this, global adoption of IPv6 remains under ten percent. With options to translate IPv6 to IPv4, or run both protocols side-by-side, I’m left wonder why?

IPv6 was originally developed to address a projected shortage of IPv4 addresses. With IPv4, it is possible to have only 4.3 billion unique addresses; this is because IPv4 used 32-bit address lengths. IPv6, however, uses a 128-bit address length; this provides 340 Undecillion unique IP addresses. To put into perspective how many that is, it is estimated that with IPv6, you could provide an IP address to every grain of sand on planet Earth. That may sound a little over the top, but with the rise of the Internet of Things (IoT), we can see a demand for many more addresses than the 4.3 billion provided by IPv4. Just think: if every electronic device in your home was assigned an IP address, how many would you need? Twenty? Thirty? More? Now multiply that number by an estimated 7 billion people on Earth and suddenly 340 Undecillion doesn’t sound so far-fetched.

So obviously there is / will be a need for the increased addresses provided by IPv6, but probably the most beneficial reason to switch to IPv6 is to eliminate Ethernet broadcasts; these are the pesky packets that are sent out to every device on an IPv4 network. By themselves, they are harmless, but if something goes wrong they can cause what is known as a broadcast storm, which can bring a network to a crawl. Broadcasts have been completely eliminated from IPv6, making IPv6 networks leaner and faster. So if you’re interested in implementing IPv6 in your Austin-area home or business network, call Frankenstein computers today.