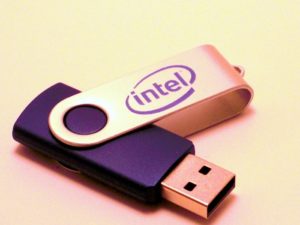 We mentioned Optane a few months back.

This is Intel’s new memory module that release earlier this past month. But what is it? Well it’s an M.2 style module, much like an add in wireless card, that theoretically allows you to keep the capacity of conventional disc hard drives. While allowing you to obtain speeds comparable to SSD drives. How is that possible? Well Optane memory is a new type of nonvolatile memory, think of it as a very small hard drive, that will cache your most used files inside of its module so that its storage so that it can send them to your system RAM much faster.

But you do not want to hear the specifics of how it works, you want to know if it works and the answer is: Yes it absolutely does. Optane memory is currently only available for systems that feature Intel i-series processors. Meaning that unfortunately for AMD fans, you will still need to purchase an SSD or SSHD to receive comparable speeds that can be obtained with the Optane module. Optane is being marketed to those users that absolutely need a massive amount of storage space, but can’t afford the massive SSD price point.

Optane memory acts like a bridge between your conventional HDD and your system RAM. What essentially happens is the Optane module will “learn” what files you access most and store them onto itself to allow the RAM quicker access to that information. Which in turn means, that programs will open faster, and your system will start up faster. Now of course, with this being a new type of memory, there will be growing pains. However, early tests of this have shown around 25% improvement, according to Intel, to overall system performance with 7200RPM conventional HDD.

Now I specifically mentioned the RPMs of the HDD because a slower 5400RPM HDD will obviously not perform as well, or see as much improvement. On the flip side of that, it will most likely result in the most noticeable performance increase that a general user will see. Think of it as the difference between Baseball and Softball for the 7200RPM drive increase. Essentially the same, but different enough to tell them apart. Then think of the increase from the 5400RPM drive being the difference between T-Ball and Major League Baseball. Again, essentially the same base platform, but there is a more obvious difference to how the game is played.

If you are interested in upgrading your system with an Optane module we hope that you will consider Frankenstein Computers. We are your Austin Area Computer Repair Service Providers.

Frankenstein Computers has been taking care of our happy clients since 1999. We specialize in NO CONTRACT IT Support, Cyber Security, IT Service, IT Security, Office 365, Cloud, VOIP, SPAM, Wireless, Network Design, MAC repair, PC Repair, Virus Removal, remote support, web design and much more. See what our clients are saying about us on Yelp!