iOS Version 11 Is Out: What You Should Know 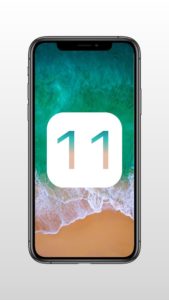 The big iPhone update has released today, version 11 and there are a few things you will want to keep in mind.

First being, if you are not an early adopter of ios updates you might want to wait a few days to a week before updating. This is a fairly substantial update that changes a lot of behind the scenes methods of how the iPhone operates. If there are any problems they are going to be found by users, like you and me, over these first few days, and Apple will put out a patch to fix those detected issues later in the week and it will probably be closer to 100% after a week.

If you want to keep away from even the possibility of having any issues, you may want to delay that update till next week. (Also keep in mind that it will not PUSH the update to everybody right off the bat, and it will ask your permission to update itself so it should not be a surprise either. If you DO want the update before your even ‘in line’ to receive it you are able to force the update under Settings.)

Before you install the update, however it is a good idea to backup anything you might need that is on the phone, just in case. The possibilities of something going wrong during an iPhone update are always present but maybe a bit more this time due to this being a more substantial update. You can easily backup your contacts (and some photos) with iCloud (another setting found in your Settings folder) but if you want to do a more substantial backup you can hook your phone up to your computer and iTunes and perform a full backup of the phone.

The last big thing to watch out for is the fact some older apps will NOT work anymore after this update. Apple is finally moving from a 32-bit system to a 64-bit system and some apps simply will not run in this new environment. In 2015 Apple forced any developers to start preparing for 64-bit and forced anybody moving forward to add support but any very old apps made before then that stopped support may not work. Here is how you can tell. If you go back to your Settings, and then General and About, look for one that says Applications.

If you see an arrow here and you can click on it you will be presented with any apps that are 32 bit that are on your phone that probably will not work after your update. If you cannot click on Application then all applications on your phone are 64-bit and you have nothing to worry about! Of course if you have ANY questions, or Frankenstein Computers can help you with this in any fashion, do not hesitate to give us a call!

Frankenstein Computers has been taking care of our happy clients since 1999. We specialize in IT Support, IT Service, MAC repair, PC Repair, Virus Removal, web design and much more. check out what our customer have to say about us on Yelp!