Fake Antivirus: What Are They And How Do You Avoid Them? 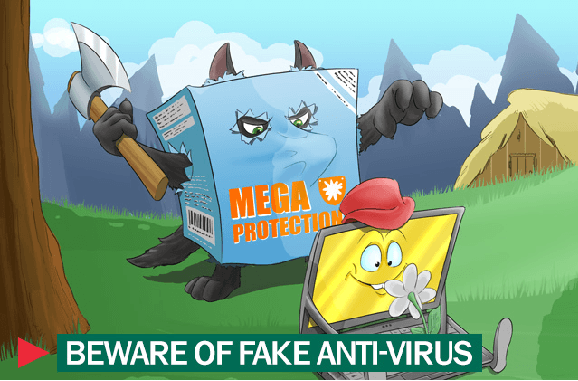 Cybercriminals are creative. They are always coming up with new ways to worm their way into your computer, putting your personal data and your money at risk. A current method of attack is fake antivirus. These products appear to be authentic, but you need to beware.

When you have been on the internet, have you seen popups or banners advertising antivirus software? Often designed to look like a scan has been performed, and accompanied by a message that “multiple viruses have been found,” these ads appear legitimate. They can even appear as results of a search for antivirus. They will ask you to perform updates, install software, or remove items from your system – but you should not take action on these messages! Rogue antivirus can wreak havoc on your system, infecting your computer with malicious software, stealing personal information, or corrupting files. And – they will ask you to pay for all of this!!

If they appear so authentic and are designed to be so misleading, how can you protect against them?

Look For Signs
Be familiar with your chosen antivirus’ alerts and messages, so you can recognize the unfamiliar. Two common warning signs of a fake message are lack of a company logo, and an early request for credit card information. Reputable antivirus providers will not ask you to pay for updates or basic actions.

Do Your Research
Perform a quick search on the reputability of the company. Just because their ad makes them appear trustworthy doesn’t mean that a click can’t lead you to a malicious site or allow a botnet to download malware. The more you know, the safer you are.

Use Your Security Settings
Once you have researched and installed a reputable antivirus, use the features and settings it offers:
• Enable the firewall to monitor traffic to the internet.
• Configure your settings to allow automatic updates to your antivirus. This keeps your antivirus up to date with protection against newly released and discovered viruses.
• Use anti-phishing, anti-spam, and anti-banner controls, to keep the fake antiviruses from reaching you in the first place.
• Remember, you don’t need two antiviruses. Installing multiple antiviruses causes them to work against each other, and can cause system performance issues.

Be Mindful
Be aware of the latest scams. Read our blogs. =D With a good antivirus and a general awareness of online threats, you can feel well guarded against an attack. If you think your system has been infected with a fake antivirus, bring it in so we can perform a full system scan. We can also evaluate the protection you have in place, and make recommendations for changes, if needed.