Should Your 10-Year-Old Have a Smartphone? 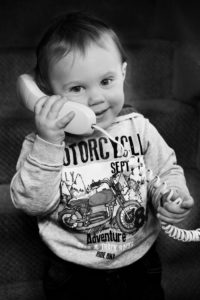 First, a caveat: we know this issue of giving youngsters smartphones is a very personal decision, something each family must decide on its own.

We also know that we potentially could be opening the proverbial can of worms here (but we have also read that controversy is good for blogs, so we are going to give it a whirl….)

There are pretty much two very opposing camps on this particular issue. One is on the “Heck NO!” side of the question: a child under the age of 13 or 14 is way too young to have a smartphone (or even a cell phone for that matter.)  Or more clearly, to have unbridled access to the Internet and the apps that a smartphone will give him.

The opposite camp says, “Heck YES!”  Best to get your children acclimated to the online world, sooner rather than later. Plus, the phone also helps keep my child safe and – hello! – that is what parental controls are for!

Here is some more fire for both of the sides.

The “Heck NO!” side:  Some parents are of a mind that getting a child a smartphone because “everyone else has one,” is no reason to get one. What is more, a smartphone and its data plan are expensive and young children often tend to lose things.

Also, not having a smartphone until one’s child is a teen means she can get a job to pay for the phone and its data plan. Waiting until the child is teen and having her work for her phone can be a great gift to give one’s child: she has a better understanding of what it means to work for something she thinks is worthwhile (and she has learned how much of her part time job earnings goes to pay for it.)

Many parents opt to give a younger child a simple cell phone (one without data.) This gives him the access to parents that we value and helps keep him safe, without any access to the internet.

The “I think it will be fine” side: As mentioned above, parents who purchase a phone for their young child often do so primarily for safety reasons; they know that their child can call them in case of emergency.

These parents also may opt for a simple cell phone because of young children’s propensity to lose things: losing a less expensive phone is not as big of a deal.

When it comes to smartphones, many parents decide to give their child a smartphone depending on their child’s maturity, as well as the family budget. They may require that the child do extra chores around the house or stipulate that a certain grade point average be maintained, in order for the child to continue using a smartphone paid for by parents. Parents also often have rules regarding when the smartphone may be used and may require that the child hand over the phone by 8 or 9 p.m. each night (to ensure the child is not surfing the Internet or texting friends until midnight.)

Again, it is always up to each family individually: you know your child better than anyone else would.

What is your take on 10 year olds having smartphones?